Vivian Larson, 91, of Argyle, MN, after a very long and full life, died on Sunday, January 23, 2022, in North Valley Health Center, Warren, MN, with her husband and family at her side.

Vivian Vandetta Sparks, one of five children born to James Alvis and Edith (Southward) Sparks, was born on February 12, 1930, in Marlow, Oklahoma. Raised during the dust bowl, Vi’s mother died when she was 10 years old. Her father moved the family to New Mexico and later to Livingston, CA to be near his parents. After graduating from high school, Vivian’s life circumstances left her a single mother to five children by the time she was 29. In 1961, she had the great fortune to meet a young Minnesota native and teacher just returned from the Army, Allan Larson. Pretty soon the two were inseparable. When the couple headed to a family function (with five kids in tow) it became clear that getting married would make life a whole lot easier. One spur-of-the-moment, lightening-speed drive to Las Vegas later; including a borrowed dress, hemmed in the car by her sister, and borrowed rings; the two were married on June 11, 1962.

By 1965, it eventually became clear that the family was ready for a change. After a cross-country road trip, all seven Larsons piled out of the ‘61 Chevy in Argyle, MN, where Al had secured a job teaching and coaching football. Vi’s next years were spent tending to her most precious gift and greatest achievement: her children. From 1969-1987, she worked at Valley Coverall as a mender. Vivian excelled at sewing and handcrafts her whole life. She was active at St. Rose Catholic Church, and was a longtime member of its sewing-circle. In addition, she served as Past Regent, Vice-Regent, and Financial Secretary of the parish’s Catholic Daughter’s of America. 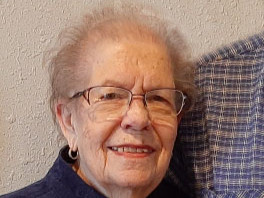