Margot Alzaida Jelleberg died on November 26, 2022, at Presbyterian Homes of Bloomington, MN. Visitation will be from 11 a.m. - 12 p.m., followed by a funeral at 12 p.m. on December 9th, at Sundahl Lutheran Church in Aneta, ND. Burial will take place at Silent Hills Cemetery in the spring. Funeral arrangements by Bilden Askew Funeral Home, Northwood, ND. In lieu of flowers, you may make a donation to Sundahl Lutheran Church or Silent Hills Cemetery to help maintain their beautiful gardens.

Margot was born on January 13, 1928, to Carl and Borghild (Moe) Thompson at their farm near Aneta, ND. Margot attended grade school at Aneta and Sharon, ND, graduating from Sharon High School in 1945. She attended North Dakota Agriculture College (NDSU) for 3 years and then taught at Finley Elementary for 1 year. She returned to Fargo, where she was introduced to her future husband, Harold Jelleberg by her college roommate. According to Margot, she answered the door for her roommate’s boyfriend with her wet hair up in a towel. He relayed back to Harold that a very pretty woman answered the door and perhaps Harold might be interested in asking her out. Before meeting Margot, Harold and a friend “checked her out” by visiting the deLendrecie’s Department store where Margot was working in the hosiery department. Stories have been told that Harold and his friend were caught peeking over the displays, mistaking a much older woman for Margot at first. A first date was arranged, and despite Margot first thinking he was too short, and her mom thinking he had shifty eyes, they were married on October 20, 1950. Margot helped Harold as he completed college by typing his papers in a small house trailer parked in the Armory parking lot on the campus of NDSU, placed there for returning servicemen after the war. After Harold graduated from NDSU in June 1951, he was hired by the United States Department of Agriculture. They moved to Ellendale, ND and after 1 year there, Harold was transferred to Forman, ND. The couple believed that living in Forman was like living in Mayberry RFD as life-long friendships and memories were made. Their three kids were born there and Margot kept active in Cub Scouts, Sunday School and church activities.

In 1965 the family moved to Bismarck, ND where Margot worked at Simle Jr. High during the school year. They then moved to Grand Forks in 1967. During their years in Grand Forks, Margot worked in the offices of Schroeder Jr. High, Grand Forks Elks Lodge and the UND Alumni Office. Margot retired in 1984 and they then moved to their lake home on Marion Lake near Perham, MN. After retirement she kept busy with quilting, Church Council, as well as planning and serving of funeral lunches at Calvary Lutheran Church. She was always ready to host her family and friends at the lake and her, Harold and their dog Boots always stood outside and greeted everyone as they drove in for weekend fun. Sunday afternoons made her sad as they watched their company head home for jobs and school. Margot and Harold moved to Minneapolis in 2011 as Harold’s health declined. Margot moved into Presbyterian Homes when Harold died in 2012 and has resided there until her death.

Margot is now with her “sweety” and all those who loved her. We will miss hearing the stories of her growing up, sharing how much she adored her 2 brothers and sister, smelling the fresh baked bread and homemade baked goods that greeted us so often when we came to visit, playing Dummy Rummy around the kitchen table at “the lake” and coming home late at night and finding her working at her sewing table waiting up for us (sorry Mom). She could never rest until we were all safely home. You can rest now Mom, you did good, you are home.

Online guestbook is available at www.bildenfuneralhome.com. 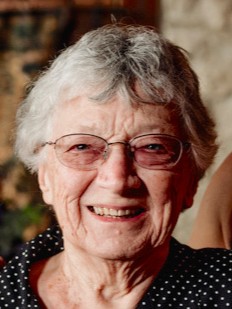